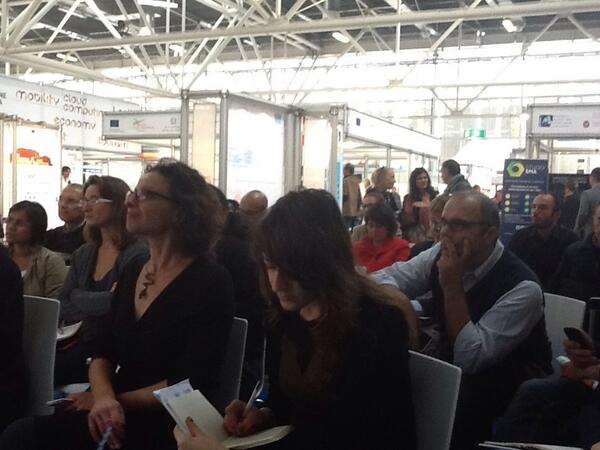 We talked on October, 18th at the Smart City Exhibition in Bologna (Italy) as keynote speaker at a round table between tekkies, university professors and architects interested in how digital technology can contribute to activate the new public spaces.

We showed our experience in Zaragoza, where city wifi, open source architecture and open place making form a promising mixture with the potential to become a succesiful experiment in engaging citizens in the making of a new, open city in the midst of the digital era. A city that suffers from the same problems that most of southern European cities do (unemployment, institutional legitimacy issues, austerity, etc) but a city that faces such challenges with an increasingly open an innovative approach in which civil servants act as facilitators and city hall premises are open workshops to enable citizens acquire new skills.

We told the audience, in sum, about the (open) path our city has taken towards an intelligent citizenship.

Italian journalist Francesca Battistoni kindly talked to us some days ago as part of the preparation of the Smart City Exhibition. Here is an excerpt of the interview:

– Tell us about the long path the city has followed since you started years ago with Milla Digital project:

It has been really a long path, full of obstacles. The major obstacle has been the economy downturn in the recent years, paralyzing the private fundind and imposing severe restrictions to the public funds. Nevertheless, I think that, as city planners, we were able to understand quickly the new set of rules we had been given. We learned very quickly that, in order to have an opportunity, the city had to be more agile in developing products and services, we had to apply lean thinking to the design of sustainable infrastructures, we had to seize the scarce windows of opportunity that appeared. Five years after, I feel that we have partially succeeded. The city has one of the widest public WiFi network in Europe, a set of public funded start-up incubators, a unique citizen engagement tool such as the RFID citizen card, and a leading role in open source policies (Linux, open data, promotion of the “maker” movement, etc). We have set the foundations of a strategy that goes well beyond IT policies, and reach mobility, engagement, green energy, learning and, ultimately, employment.

– Which are the Key elements nowadays starting from a recently approved strategy on open government (http://www.zaragoza.es/contenidos/sectores/tecnologia/Estrategia-Ciencia-Tecnologia.pdf) as a comprehensive tool to foster new services?

The keyword for such strategy is OPPORTUNITIES: for people (better jobs), for companies (access to talent and innovation) and for institutions (new ways of participation to overcome the democratic crisis and to establish new links with the citizens). […]

– Can you tell me about the initiative on open data and apps: http://www.zaragoza.es/ciudad/risp/ or alternatively, datosabiertos.zaragoza.es

Quality and cuantity. Data has to be fresh, unique, clear and geopositioned. We have developed our city portal as a real time map with several layers of information. In terms of apps, we prefer to foster the building of apps by third parties: citizens, developers, companies. To achieve that, the quality is essential, but also dissemination activities, events, training, documentation, etc. People do not massively use institutional apps, but institutions can do a lot in order to help people use apps.

– What are the key element to produce a local ecosystem of entrepreneurs, developers and local actors and to merge different profile and perspectives?

Political leadership is a must. A committed, highly motivated team is essential. But you wouldn’t get very far if the team does not adopt a rol of facilitators. We are not the main characters in the play. Is the citizens that want to engage in the making of the city and our role is to facilitate them that task, so they can feel comfortable and can fulfill their personal or professional growing needs. We can not make the new digital city by ourselves, we need help. […]

Full interview in Italian can be read here.

4 thoughts on “An open path to a smart city”