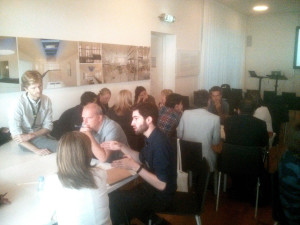 On September, 4th we were invited to the European Network Of Livin Labs’ (ENOLL) Summer School in Amsterdam to collaborate in the “Innovate with young people” workshop with Carolyn Hassan and Penny Evans from Bristol’s Knowle West Media Center. The goal was to work and share on strategies and examples to effectively engage young people through creativity and innovation.

By “young city makers” we mean engaging young people in shaping our cities of today. Narrowing the divide between people and institutions is something that concerns everyone of us, a priority as important as making our societies more cohesive, inclusive and economically vibrant. Jobs and participation are thus the main drivers of many of the digital strategies of cities. They are at the very core of Zaragoza’s oGov strategy.

Where can this “new” engagement happen?

Engaging young citizens is better addressed in places with plenty of young people such as… cities. If many more individuals lead to many more ideas, then it happens to be that this attractiveness of cities turns them into the perfect place to experiment innovation (and potentially apply those innovations somewhere else). City councils and companies are increasingly aware of the potential of cities to generate innovation and so new creativity hubs are appearing in places such as Bristol’s KWMC or Zaragoza’s “Etopia Center for Arts and Technology”, shaping what Anthony Townsend calls “a planet of civic labs”. Accordingly, these “generators of new ideas” are often fueled by public-private partnership schemes and threaten to radically change the way R&D processes are performed.

What are our tools?

There are many tools that help communities and individuals perceive value through innovation and, at the same time, provide value to the city and to its social, public and economic life. The common trait we want to highlight about these tools is their open source nature. Whether it’s software/apps, hardware, data, networks, processes or buildings, the open source characteristic lowers the barriers to participation (accessibility), makes the tools understandable, allows reconfiguration and, ultimately, binds the success of the project to the community of users and contributors.

What examples of innovative youth programs are out there?

There are a bunch of them but, unfortunately, the duration of the workshop (and the length of this post) only allow us to name a few. Bristol shared the “Girls making history”, “Democratree”(under the umbrella of IES-CITIES european project) and “Data toolkit” projects, excellent examples in which local communities recognize themselves as the main characters in a play that is mainly about personal growth and cooperative city making. In turn, we talked about Zaragoza’s “Children City Council”, an example of a civic engagement process where our “Collaborative maps app” is used by children to improve their neighbourhoods. And we also presented Zaragoza’s “Etopia Kids” summer camp, a program designed by Arduino’s creator David Cuartielles in which kids are introduced in open source technologies such as Scratch and Arduino to build their own games, short animation films, robots and, ultimately, to program certain functions in Carlo Ratti’s Digital Water Pavilion (a hybrid between a building and a machine), a practical example of open source architecture.

The importance of places and processes

Places have a unique power to make people feel attached to them. This is why open place making is a trending topic in architecture nowadays, when thousands of places in cities are being reconfigured through engaging or participatory processes. The degree in which these collaborative processes lead to optimal solutions for places may depend of a number of factors but, as long as the conversation keeps going, we like to view minimal improvements in places obtained through these participatory processes as big gains for our cities, and no way should these conversations be perceived as waste. After all, it is the inefficiencies of cities that makes them so powerfully attractive; and the same principle holds for civic participation.

The workshop combined our presentation with work groups ellaborating on these ideas, sketching new projects and debating on new lines of action. As Homere put it, the beauty of Ithaca is not the destination but the journey itself. Involving young people in our work as “city makers” has provided so far some of the most rewarding stages of our professional journey.