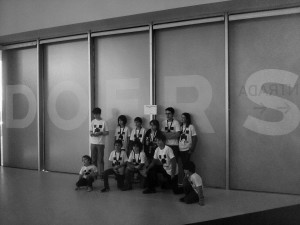 Innovation in micro-politics (a.k.a. new ways of participation, probably beyond open government) is often linked to progress in fields such as technology, learning, social economy, or organizational culture… and is mostly and urban phenomenon. Cities, by themselves, have good probabilistic reasons for being innovative just by the natural product of size, density and heterogeneity. But, is there anything that can be done to improve or (better) multiply this background innovative pulse?

Cities in the global era seem to be desperately reinventing strategies to attract talented people, which is fine since heteregoneity (or diversity) is one the keys. But, at the same time, the “talent strategies” of cities should consider identifying and watering inside talent, as a matter of responsibility, of course, but also because identity is important. A wise mix between size, density, diversity and identity is what can make our city cast a unique light on the global map. Nurturing and capitalizing the talent of the local people might be the smartest and most responsible strategy. How many creative individuals in our cities underperform? How much talent around us is hidden, wasted or just frustrated?

Empowering people starts by acompanying and promoting their personal growth. By identifying those underperforming makers, thinkers or artists (“innovators” in the broadest of senses) and, even better, by being identified by those potentially creative people as “facilitators” of their professional, artistic, academic or personal development . Ronan Paddison describes how size, density and heterogeneity join to give birth to communities and how these communities, in turn, self-organize. Although Paddison’s work mainly focuses on the issues related to ethnic, social and neighborhood communities, we find interesting foundations to sketch the forming principles of a new urban community whose dynamism is important in this informational and global age: the community of innovators.

These communities of innovators go beyond of what Richard Florida calls “the creative classes”. Florida’s creative classes refer to the individuals that have skills in areas such as technology or arts and that often inhabit gentrified neighborhoods. However, this definition does not presume or imply any form of organization. The creative classes inhabit places and, indirectly, shapes them through their consumption, mobility or entertainment patterns, but do not necessarily engage as a community in civic action. They do not necessarily become a community unless something galvanizes them, and that “something” often takes the form of the so-called “new innovation hubs”. Not surprisingly, in the last years we are witnessing the birth of a new type of urban innovation hubs, shaping what Anthony Townsend calls “a planet of civic laboratories”.

Developing the shared economy, relearning how to make food, garments and robots, experimenting new forms of long-life education, tightening physical as well as virtual links amongst its members, these new innovation hubs are hosting some of the most radical expressions and ideas in politics, arts, science, culture and urbanism. If we are able to design those innovation hubs with accessibility and inclusion at the forefront, we will probably speed up the pace at which those new ideas permeate into society. And we will surely enlarge the skillset of the local population, improving their resilience and opportunities.

But, if we are serious about making of innovation a cultural change for good, then it’s a good idea to focus primarily on children. “Etopia Center for Arts and Technology” in Zaragoza (Spain) is named after one of the “fathers” of the smart city concept, William J. Mitchell, and nailed between two of the most populated working class districts of the city. Finding and provoking interactions between art and technology, encouraging both entrepreneurship and creativity are some of Etopia’s fields of action. Under the “Etopia Kids” program, children from the city and its area of influence meet there regularly to experiment with Scratch, Arduino, film making and robots. Last Christmas, 12 kids ranging from 9 to 13 years old from the “Zagales Hacklab” local community of young geeks organized an event on Minecraft. During one month they held physical and hangout meetings, negotiated logistics with Etopia’s staff, planned the program, built their on-line minecraft environment (including ad-hoc games), created the registration web, designed the “T-shirts” of the crew and, finally, produced the event, which was sold out with the participation of more than 50 other kids and their families.

Etopia seeks to attract researches, technologists and artists in residence from distant places, but this Minecraft self-organizing community of kids is a world-class example of investing in local people and of what we mean by empowering children.

A “talent strategy” based on cultivating home-grown talent also works for attracting external talent. Both need similar conditions and environments to boom. In his work “Space of flows”, professor Manuel Castells describes the ingredients that metropolitan innovation clusters need: strong R&D centers feeding industry with new developments, venture or risk capital to finance innovative projects and a high degree of social networking (probably enforced by physical proximity). Unfortunately, city authorities do not have access to most of the levers that trigger capital or R&D. But, by investing on local people they can activate home-grown creativity and by an intelligent urban planning they can reinforce it through density and diversity.

R&D, industry, talent, capital and social networking, all at the same place, are elements that alone, and with some luck, may end up producing a “silicon valley” in the United States or a “bangalore” in India: powerful economic clusters with limited civic or urban activism. But making cities that empower people and children can also be a viable strategy for cities in globalization, and maybe even more rewarding and sustainable in the long term.

Next post. How to face globalization (IV). Changes at work. The urban Jiu-Jitsu.

6 thoughts on “How to face globalization (III). Cities that empower children”