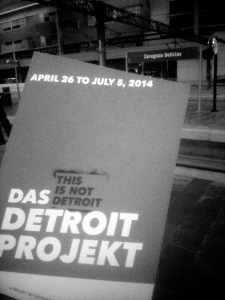 This is not Detroit. Or, at least, it shouldn’t be. But it could. The collapse, resilience or rise of a city depends on a number of factors, but it ultimately depends on you. Whether you are an urban planner, technologist, public servant, entrepreneur, or just a plain citizen, you need to know that the fate of our cities is not written anywhere. It is a story that we all write with our daily acts, decisions, and work.

Cities are threatened by common challenges such as climate change, globalization, economic downturn, and are fueled by people, capital and ideas. They are facing radical changes in the labor market and seeking new opportunities from innovation in education, technology and culture.

Cities have been evicting manufacturing plants from their urban soil for decades while planning and developing digital innovation districts which rarely have fulfilled all their potential in terms of jobs and economic boost. On the opposite, “traditional” manufacturing industries, although beaten up by globalization, have provided a solid crutch for cities limping through the last crisis, and are now seriously considered by innovation policy makers as an important actor in the coming years. Urban manufacturing will be more relevant over the coming years, as cities and manufacturers mutually benefit from this new partnership.

New urban phenomenon such as 3D printing, digital culture, coworking, innovation and creativity hubs may contribute to competitiveness gains in decaying manufacturing businesses while these companies, in turn, may help to support innovation and urban culture programs. As José Carlos Arnal puts it, manufacturing can also fullfill the “wishful thinking promises of the so-called digital revolution.

This week, “Etopia Center for Arts and Technology” hosts “Das Detroit Projekt” (This is not Detroit) an inspiring program on the future of urban industries in a post-industrial era. Bochum (Germany), Liverpool (Great Britain), Gliwice (Poland) and Zaragoza (Spain), four cities with Opel manufacturing plants, think and share risks and opportunities of post-industrial cities. In the form of an extended art festival, “Das Detroit Projekt” explores the implications of this new urban paradigm on art, culture, labor, innovation, and life.

For decades, Detroit has ruled the destiny of many other cities in the world. After its collapse and bankruptcy (predicted by the great urbanist Jane Jacobs in the 60s), many cities understand the risks of shaping the city form and economy on the basis of one single industry. The “Detroit lesson“ has been one of the most pedagogical examples that urban innovation policy makers might find to support their ideas for changing unhealthy growth models. But, at the same time that we hold the “This is not Detroit” warning sign in our right hand, our left hand should raise with a similar “We are all Detroit” message, as Jenenne Whitfield proclaims.

They are two sides of a same coin, because cities are not the same (each one is different and will follow its own path in history), but citizens are both diverse and alike, all sharing similar concerns and hopes, and should be aware of their increasingly growing potential to shape the future of our cities by means of a collective action.