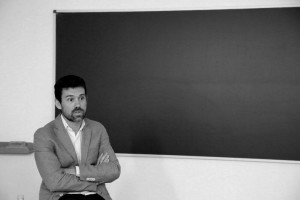 On 28th, October 2015 we were honored to lecture at the opening session of 2015-2016 edition of the Master of City Sciences at Politechnic University of Madrid, sharing our latest thoughts and experiencies on urban innovation with students and staff.

Everything starts by Jaime Lerner’s statement about cities as the great solution, fostering progress in the fields of economics, sustainability, quality of life, and innovation.

The desire to climb up the prosperity ladder has been the main driving force that keeps attracting people to cities. That only means that cities have always been perceived as extremely ‘valuable’ by people. Now… can we aspire to quantify the value of cities? In the lecture, we presented several works by prominent city scientists, as well as subsequent laws that cast some light into this question, and then move to another important subject: how can we reconfigure cities to maximize that value?

While cities can and are actually fixing the biggest problems, they also have important ‘bugs’. As an example, the rise of the urban population goes in parallel with a decrease in malnutrition statistics. But, sooner than later, the obese will equal the undernourished. In our understanding, this is what urban planning is about. If this ‘fixing’ is done through technology, then we use the buzz-word “smart city”.

A new science of cities is blooming now that many scientific disciplines are turning their spotlight towards cities. Later cross-cutting research have seemed to prove some of the anticipatory observations that Jane Jacobs did in her cherished New York in the 50s and 60s. Data science tells us that, whenever you happen to move to a city twice as big, you do a 15% more of everything. A 15% more of everything might seem very little for an individual but, as Newton’s gravity adds up over distance, it accounts for the irrestible force that turns towns into cities, and these into metro- and mega-polis.

We presented the concept of the ‘innovation spiral’ as the only practical ways to sustain this unstoppable urban growth. And that is why innovation in cities is not only important, but crucial. How else will the world be able to feed the probable rise of an urban middle class in Asia, Latin America and (soon) Africa.

Once the conceptual framework is drawn, once the global and local importance of cities as innovation producers is outlined, we can sketch the nature, tools, processes, agents and funding sources that are present when producing urban innovation.

What do we refer to when we talk about the city as a platform? How can we build an effective API to the city? How do we trigger, feed and sustain the innovation cycle? How do we expand its impact? How do we include the digitally illiterate into this process? How industry, institutions and citizens can collaborate on equal terms? Are smart cities forced to settle for industry-driven strategies or cities can, in fact, think by themselves? What about places? How can architecture and innovation walk together? What kind of short and mid-term gains can we expect from incorporating (big) data analytics and what are its perils? How can artists contribute, or even lead?

We reckon a certain unbalance between questions and answers here, but our aim was never to provide certitudes to students but to open wider mind-paths when approaching to the fascinating task of city making. After all, we are all beginners in studying cities, and our heads are still full of question marks.