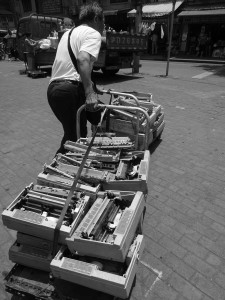 Well, in the first place, in case of a Google collapse I probably wouldn’t be publishing this post through the ‘Google friends’ WiFi network from the Starbucks I am sitting right now…

Google going into chapter 11? Can you think that? And even… I am thinking of some examples of high tech giants of the past and how they collapsed, some with thunder, others slowly fading in silence. I still recall the case of Nortel (Northern Telecom), the all-mighty Canadian ATM leader (for newcomers, ATM stands for Asynschronous Transfer Mode, probably the best thought communication protocol ever and one of the less succesful), whose shrinking stocks ended by turning into dust not so many years ago.

Here are some of the biggest bankrupcies in history. Job losses aside, when an airline company shuts down, passengers stop flying, assets (airplanes, buildings,…) are auctioned. When the telecom provider Worldcom went into chapter 11 clients just flew or were migrated to ther providers, its transmission equipment engrossing the second hand markets (and spirally contributing to the ruin of suppliers like Lucent or Nortel). If Coca-cola vanished, someone would probably buy the brand and the secret recipe. Our life wouldn’t change so much, many drink Pepsi after all…

But… what if Google broke down? How such a process would be? Who would buy Google’s assets: data centers, servers, data? What would happen with our emails, our pictures, our life?

Would I be capable of taking home a glimpse of your intimacy, reader, inside of a hard disk bought in an electronic thrift store?

Another twist to this story. During the recent financial crisis we heard (too often) the phrase ‘too big to fail’. Would be Google too big to fail? Would the tax payers be obliged to support Google in such a contingency? Would Google in that case become public? Would that be for the bad or for the good?

Even if Google stays healthy (which is the most probable case), has the time come for regulators to think about how sensitive for all of us, and how big and monopolistic Google has become? (remember the baby bell telcos and ATT case).

Many implications to think about.