“[…] Standing there, as immune to the cold as a marble statue, gazing towards Charlotte Street, towards a foreshortened jumble of façades, scaffolded and pitched roofs, Henry thinks the city is a success, a brilliant invention, a biological masterpiece […], an eighteenth century dream bathed and embraced by modernity, by street light from above, and from below by fibre-optic cables, and cool fresh water coursing down pipes, and sewage borne away in an instant of forgetting […]” 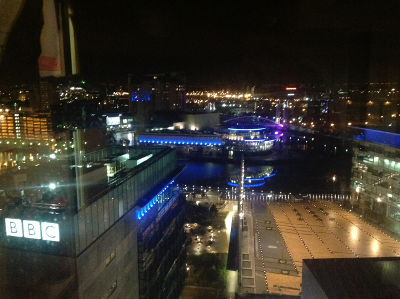 Of course few of us would disagree at the novelist view of the city as a “brilliant invention”. He is capable to point out some of the infrastructures that in the past have made possible life in the cities: sewage and clean water supply were the most important in terms of the dramatic improvement they posed on health. Public lightning made our cities safer and, recently, fiber optics allowed the delivery of new services to its occupants. What the novelist can not grasp yet is the new set of infrastructures that lay hidden at the city’s “dark” side.

During the last years, cities have become populated with new digital artifacts. Sensors, displays, and networks constitute the eyes, face and nervous system of the digital city. However, sensing is not sufficient to make an organism smart. Raw data must be stored and organized prior to be converted into meaningful information ready to be processed by some sort of intelligence.

Thus a new layer of infrastructure must be deployed to make some order out of a growing digital chaos. Integration buses and common platforms must be put in place to allow data to be used effectively by the “smart layer” of the city, via either centralized or distributed apps.

Zaragoza has just closed its digital agenda 2003-2011 with some important achievements. Three of them are especially relevant at this point:

But the city has to move forward and respond to new challenges. The new digital agenda for the coming years, named “Open governnment in the digital city 2012-2015. Smart citizenship” establishes the roadmap to the “open source city”. A concept that spreads through data, networks, software and even architecture. The roadmap specifically states in its action plan the need to implement a cross technology platform to integrate the diverse smart city systems and solutions that the city is deploying.

The city will evaluate criteria such as robustness, flexibility and openness when adopting such technologies. In addition, smart city platforms must ensure that they are mature and suitable to be deployed at large scales, supporting an increasingly growing variety of uses. Both views establish a cross-need for carrying out field trials capable of reaching new scenarios.

In turn, Zaragoza would provide its more valuable asset: a digitally engaged civic community. The huge amount of data generated by that community of 150.000 people making extensive use of the public services, or by the 10.000 sensors deployed, could be better stored, organized and understood by deploying such an infrastructure . “Big data as a service” could become a possibility and its potential to create new businesses could be tested and fostered adapting the existing incubation programs already in place in the 5 start-up incubators that the city runs.

To sum up, there is a chance to accelerate Zaragoza’s roadmap to the “smart citizenship” and “open source city” ideas, while Zaragoza’s unique innovation ecosystem can provide a valuable testbed to demonstrate the capability of the selected platform to integrate brownfield, complex and advanced smart city infrastructures.

The city as a whole, that “brilliant invention”, will become triumphant from the current challenges if we fully exert the potential that lies within cooperation.

2 thoughts on “Dark infrastructures for our most brilliant invention: the city”