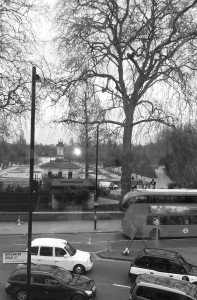 On Jan, 29th 2015 we spoke at the “Smart energy UK & Europe Summit” in London, where we had the chance to discuss and develop the idea of advancing towards a “data sharing economy” at the urban ecosystem. What we were presenting, basically, is how a new kind of organizational relationship between urban players could eventually lead both to the creation of new social, scientific and economic value at the local scale, and to the development of new business prospects in those industries willing to play the game.

Cities have faced challenges in history with innovative ways of transforming the materials at their reach into innovative solutions. Whether we are talking about limestone, wood, brass, concrete, copper, or electrons, engineers have effectively used technology to provide security, access to drinkable water, sanitation, wired communications, or energy to households and people. Today, data is the new material upon which we can continue to develop innovative solutions to deal with the “bugs” or impracticalities (in Jane Jacobs’ words) of urban life.

For those who are not convinced about the statement that data is the new gold of our age, let’s take a look at the stock value of Volkswagen, the top car selling company in the world, which stands in the area of 100 to 130 Billion dollars (depending whether you look at it before or after the emissions scandal). Facebook, a company that delivers free services to most of its users, doubles Volkswagen in stock value and Google, whose entire business is built around data, triples it. Because most of the world population lives in cities, you, urban reader of this article, are sitting over a gold mine.

It happens that the exploitation of the big data produced in cities (our gold) is in the hands of distant companies. Our privacy has not only gone; it has been privatized for the benefit of Silicon Valley billionaires, who mostly don’t pay taxes locally nor create any jobs in our local communities. Über knows how traffic flows in the city, and Nest, as Andy Baynes explained to us, could use the energy data collected from millions of homes to detect energy leakages in buildings and help cities in the design of housing policies that improve their energy performance. But although Über is offering some of its data to certain city halls (in exchange of peaceful relationships, we assume) the gap between public and private open data is still immense in terms of the value that it actually brings to our communities.

The question of who actually builds and operates the (smart) city is also central. The City Hall, formally accountable for city operations, has not only delegated many of its functions in private operators, but witnesses also how new players add services and technology to the city without asking. To navigate these changing scenario, city officials need to incorporate soft governance abilities to their skill set, they must understand innovation and globalization and be able to propose new deals to the smart city newcomers.

The City Hall, with the double help of regulation and of the appropriate business incentives, has a central role to play in the pursue of data sharing agreements between the main urban players in charge of service delivery. We have identified some of the barriers that such a process will have to overcome, such as anonymation, data silos, or the ability to sustain cooperation. In London, we presented our “Guideline for a public-private partnership in urban big data sharing”, depicting alternative routes to mitigate the aforementioned barriers and a complete set of organizational design principles for such an agreement to function. We also showed some worldwide experiences that implement some of these principles, many of which we have been able to visit and know directly as part of our recent professional path.

Ars Electronica Center in Linz (Austria), Bristol’s datadome, M.I.T. Singapore Alliance and, much more modestly our Zaragoza’s Open Urban Lab, all represent successful examples that partially implement some of the functions of our system. Their several degrees of success reveal interesting traits of how a wider urban data sharing ecosystem could take form.

In the energy domain, such a system could be the base to implement new cross-policies between the City Hall and the energy suppliers. Using an advanced digital tool as the citizen card, benefits in public services could be applied to “green” customers, for instance. New services from integrating mobility and energy data could also be designed. Finally, cities and utilities could cooperate to optimize the roll-out of the “next” urban network: the electric vehicle charging network. But those are only ideas that un-innovative urban practitioners like us have. Imagine what the communities of civic leaders, researchers and digital entrepreneurs could come up with if they could access, through the adequate API’s, to real time aggregated data about, not just the city, but their city.