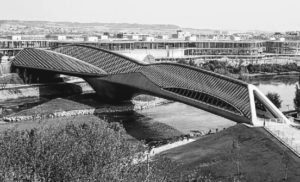 But this is not the only divide that the renewed Pavilion Bridge is intended to close. On each bank of the Ebro river, two flagship urban developments still seem unconnected. On the north bank, the Expo site, formerly dedicated to water and sustainable development and now hosting many of the regional administration offices, is mainly fueled by the regional Government. On the south, the Digital Mile, an innovation district planned by the City Hall in 2003 that has stagnated for almost five years following the financial crisis. The crisis has also left its footprints on the Zaha Hadid’s Pavilion Bridge. Lifeless for almost 10 years as a consequence of Ibercaja’s struggles to digest the real estate crash, it wil now require more than just a coat of paint to shine again as one of the landmarks of the “new Zaragoza” that emerged with the Expo 2008. END_OF_DOCUMENT_TOKEN_TO_BE_REPLACED