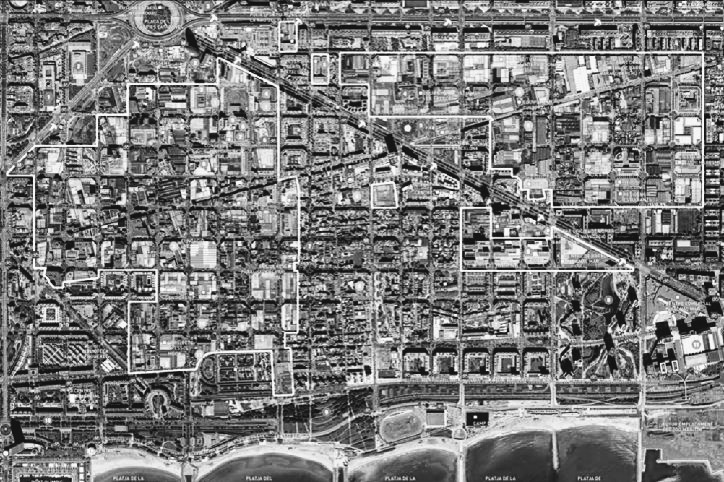 In it, the legacy of Cerdà’s urban layout serves as a landing track for Castells’ discoveries about digital economy. Jane Jacobs would have approved: perfect block sizes, mixed uses, walkability. And a focused management structure, that soon shifted its efforts from urban development to economic development. The result: more than 100.000 new jobs (many of them high-skilled) and an overall impact of 15% in the Gross Domestic Product (GDP) of the city.

If I was to extract a couple of lessons from 22@ these would be, first, that you’re lucky if you count on an urban planning culture as Barcelona has. From old Ildefonso Cerdá, to Oriol Bohigas and Josep Acebillo, things get much easier when promoters and top urban planners share a same vision and culture. And secondly, as far as the management structure is concerned, organizational flexibility is a must. 22@ was capable to shift focus from urban development to economic development rather quickly. I think this a matter of leadership.

As part of the Digital Mile team, I have been in touch with a number of innovation districts over the years. These contacts were more or less organized through an informal association led by the M.I.T. and called “New Century Cities”. In 2012 we all met in Zaragoza for a two-day set of intense workshops. We were capable of putting together a first decalogue of keys to succesfully build an innovation district. Some of them covered what I just wrote about Barcelona’s 22@, but the knowledge that we collected from those conversations went also further into some phenomena that had suddenly grown in importance in the last years: social inclusion, the participation of local communities, or the general (and vague) concept of openness, especially when it comes to public space.

By the end of 2012, the relationship between innovation districts and local communities, and how to effecively share public space, were the subjects of a subsequent workshop that I attended in Media City UK, the BBC-powered audiovisual disctrict around Manchester’s old abandoned quays in Salford. Listening to a group of people that inlcuded BBC staff, local urban planners, members of the University, district developers and district workers, I realized about the importance of a new role I hadn’t thought about before: public space needed mediators to work properly.

Inspired by M.I.T. fellow Michael Joroff, it was on my way home from Media City UK when I first began to think about place making as a way to turn the physical infrastructures we were building in Zaragoza into real places. But, places, as the Media City case showed, were not the product of top-down decisions. It’s people that bring the notion of place to a building, or a square.

At that time, my bookshelf included works from Richard Sennett, a couple of volumes from Jane Jacobs and a couple more from Jan Gehl, the Danish architect whose mantra “first life, then public space, then buildings” I found as simple and common sense as regrettably absent from what I knew about how innovation districts were planned. Our own Digital Mile carried that very same birthmark: it was built on top of a long abandoned industrial site that had been split in two by an eight lane expressway.

On the summer of 2013 we were opening Etopia Center for Arts and Technology, the Digital Mile’s main agora, physically linked to the new high-speed train station, but isolated from everything else. Since then, most of our efforts in Etopia have been devoted to bring life in, as if somehow we were trying to cleanse its original sin.

It appeared to me that applying open source concepts, agility and lean start-up thinking to place making was a path worth exploring in our quest to bring life to the Digital Mile’s infrastructures, and I started to fiddle around with them, first on a workshop on the occasion of Etopia’s opening, and then giving shape to a new space inside Etopia, the Open Urban Lab. A lab where we could co-create not only new smart services, but also real places.

But not all innovation districts are created equal. Zaragoza’s Digital Mile, Barcelona’s 22@, Belfast’s Titanic Quarter, which I visited on the summer of 2016, or Manchester’s Media City UK, amongst others, were just a particular type of innovation districts built on urban regenerated areas: old chemical plants, textile factories or abandoned shipyards. But I discovered that this was not the sole origin of these urban objects. My team mate José Carlos Arnal pointed me to an interesting taxonomy from Katz and Wagner that also contained valuable hints about the hardware and software traits that make innovation districts, errr, innovative. A must-read for innovation planners, definitely. I included some of these findings in a dedicated chapter inside my “Urban Innovation: a Practical Guide” (available in Spanish) that I compiled during the spring and summer of 2017. For instance, apart from the “Re-imagined urban areas” type, there is also the “Anchor plus” type – e.g. Boston’s Kendall Square – and the “Re-urbanized scientific park”, such as the Raleigh-Durham-Chapell Hill triangle around bio-tech, in North Carolina.

In September 2017, I had the opportunity to spend some days at Seoul’s Digital Media City (DMC), built on what once was a massive hill of 190 million tons of trash and waste generated by the 10 million people inhabiting Seoul. As its chief planner Donyun Kim writes, “DMC is based on three principles: permeable borders between buildings and street, mixed use of ground spaces, and a cutting-edge digital infrastructure.”

Maybe Asia is the continent where such a sophisticated top-down planning may work at its best, resulting in a vibrant, walkable place, hosting more than 1.000 companies and 46.000 jobs, and home for most of South Korea new media industry. And, at least apparently, crisis-proof.

The last stop of my journey through innovation districts was, in February 2018, Dublin’s Smart Docklands, where I was part of a group of city innovators that contributed to the “Dublin’s Declaration on Smart Districts”, a set of working principles that could inspire other smart disctricts around the world to adapt to the changes our society has faced during the last decade.

For the first time along my journey, the subject of data privacy took a prominent place in discussions, shaping a broader definition of security that involved the respect for personal data. Sarcastically, Dublin’s declaration was brainstormed and written at Facebook headquarters – other previous sessions had taken place at Google’s – just weeks ahead the Cambridge Analytica scandal was made public.

This only proves how the concern that we – city officials, urban practitioners and academics – showed about the use of citizen data by the industry had sound and profound reasons, and that there is a strong case for public bodies – and especially city halls –  to make progress towards a more determined role in protecting the digital rights of citizens.